I’m enclosing a picture that I haven’t told you about. It was a snap-shot our cousin Ernie in California sent to Eva and she sent to me. It’s an old, old picture of my mother’s parents. Ernie’s fathers parents.

On the back of the snap-shot Ernie had written

“These are our grandparents in Sweden. Your mother’s mother and father. Their name was Sven Munther which was changed to Enholm. Two daughters and 5 sons”.

This was consistent with the oral tradition among the Larson’s plus another clue that the village the Enholms were from was a name with three syllables.

One more clue was from the oral tradition, as recorded in the interviews with both Ingrid (my mother) and Anna (her sister). Anna Olivia had five brothers named:

The family was located with the assistance of the Swenson Swedish Immigration Research Center at Augustana College, Rock Island, IL. Knowing the year that Anna Olivia left Sweden, we were able to locate the parish where she had filed for permission to leave her parish in Sweden and travel to Chicago. Thus we found that she was from Holmestad parish.

But, we did not know the family surname since it had been changed! By reading through the names of all of the families living in Holmestad in the period 1880 to 1890, we finally found one family with the father named Sven and children having the names given in the oral tradition! It was in this way that we found the Enholms, also known as Munters or (in some cases) as Svensson or Svensdottar. 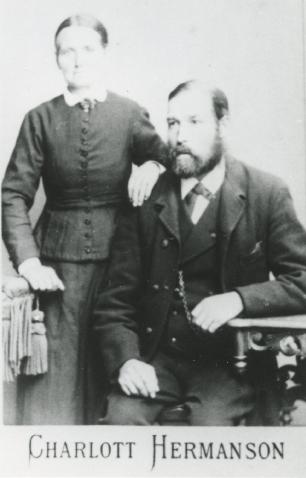 Photo of Sven Petterson Munter and his wife Johanna. Picture not dated.

Where did they live?

The answer is to be found in the Husförhörslängder for Holmestad Parish.

These are all the names of houses or torps. Hobergstorp is in Holmestad, and all of the other places are near to Holmestad

Note that the family lived for 25 years in Hobergstorp. Anna Olivia was born there, and was still living there when she left Sweden for Chicago in 1887. 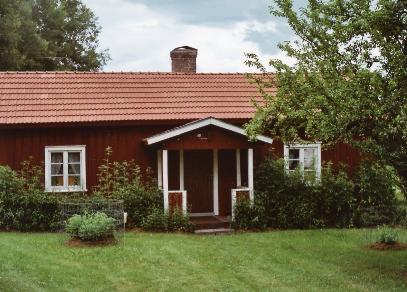 When we visited Holmestad in 2001, we met Bernt Högg, a local historian who knew the Munter/Enholm family since his grandfather Högg had been in the same military company as my great grandfather Sven Peterson Munter. We saw his family’s summer house, a torp of the same size and appearance as Sven and Johanna’s house during most of their years in Holmestad. The picture above is what Hobergstorp probably looked like, according to Bernt.

From the church records, we find that there were nine children in total:

Her daughter (Anna Olivia Enholm Larson, (Bob’s grandmother) died in Chicago in Februrary, 1921. She was one month short of 48 years of age. We have several pictures of her, and there may be more!