The children of Oscar Larson and Anna Olivia Enholm (all born in Chicago):

The last child, Sven Oscar (Uncle Roy), was born in 1904 and Oscar died in 1909. This was a tragedy for the Larson family not only because of the loss of the bread winner but also because Anna Olivia was then left with six children ranging in ages from 4 years, 11 months to 16 years. (Ida’s birthday was 5 March, so she celebrated her 16th birthday the day before her father died on 6 March, 1909. His wife’s birthday was March 7!). Ingrid, in 1989, remembered that her father Oscar was earning $100 a month in 1908).

The year 1908 was the year that Anna Olivia made her one and only trip home to visit her parents in Holmestad. In that year Sven and Johanna were living at Kämpaslätten Lilla to the west of Holmestad. Oscar’s letter to his Svarföräldrar dated South Chicago den 11-ta Juni, 1908, was sent to this location rather than Hobergstorp which they left in 1892.

Anna Olivia had very little education, having completed just a basic Elementary School course, and then left for Chicago after her confirmation. So she was ill prepared for the sudden change (in 1909) in her family’s fortune. Fortunately, there was some insurance money ($3000) which paid for the construction of a building with a store on the ground floor and living space for most of the family in the next floor above. The Larson family lived here from 1910 to 1917, when Anna Olivia and the two youngest children moved to Omaha. (They moved back to Chicago after three months!) 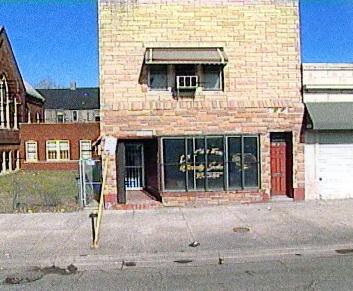 This building functioned both as store and residence for the Enholm-Larsons after the death of Oscar in 1909.

About the location: Eva told her daughter that there was a fire station next door. When the fire alarm rang, all the horses wee so noisly clattering to get hooked up and be on their way. This often happened in the middle of the night! 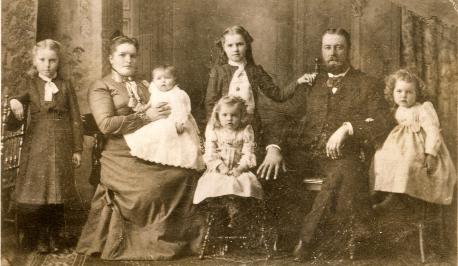 The first of two family protraits which include Anna Olivia Enholm and her children. The year is 1901 and the occasion is a baptism celebration of baby Ingrid Elvira, sitting on her mothers lap.

Family Portrait after the return from Omaha, Nebraska. The year is probably during the period 1917 to 1920. Anna Olivia died in Feb of 1921. 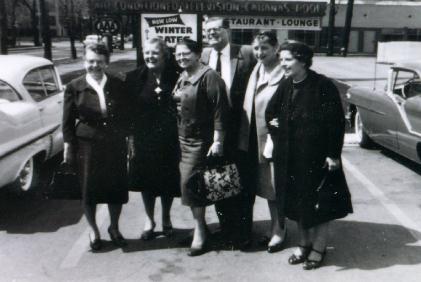 The Larson Clan in 1962. One of the last times that all five sisters and brother were together, in Chicago.

From left to right: